Children as young as four are now getting even shorter break times at school, because of a push to increase lesson time. A long-term study revealed primary school pupils today have 45 minutes less break time a week than they did nearly 25 years ago, while secondary school students have lost 65 minutes. Researchers from the study conducted by The UCL Institute of Education, found time out of class for children to play and chat to their friends has been getting gradually shorter and shorter. Overall, pupils think time away from lessons should be longer and their thoughts are supported by the researchers, who said breaks provide a “unique context for social development”. Yet, the findings showed the “virtual abolition” of afternoon break for Key Stage 2 children, aged 7 to 11, as teachers are under pressure to get results in their SATs tests taken in Y6. The researchers also found fewer young people were visiting each other after school to ‘play’ – the most common after-school activity, they said, was now watching TV or playing video games.
This week’s news story: http://bit.ly/2wzmNJz
This week’s useful video: https://bbc.in/2WxmPAn

Main question:
Should breaktimes be reduced to improve learning?
Listen, think, share
• Read through the story and talk about breaktimes at your school. How many do you get? How often? Do you think you have enough?
• The report calls on schools to stop shortening break times and to scrap the practice of withholding breaks. It also asks policymakers to consider legislating on the issue. “Working adults, including teachers, have a right to breaks, but there is no equivalent policy for pupils,” it states. Do you think there should be?
• A Department for Education spokesperson said it was up to schools to decide on the structure and duration of the school day. Do you think it should be up to schools to decide? Do you think pupils should have a say too?
• The report’s lead author, Ed Baines, said: “Despite the length of the school day remaining much the same, break times are being squeezed even further with potential serious implications for children’s wellbeing and development.” Do you agree with his sentiments?
• If you could design the school day, what would it look like? E.g. what time would you start?
• Discuss what you think are the advantages of breaks and the disadvantages of having breaks during the school day.
• Look at the chart below, which shows school day hours from around the world. Talk about which of the countries, the different hours they work and have breaks and their similarities and differences. Do any of the country’s days surprise you? 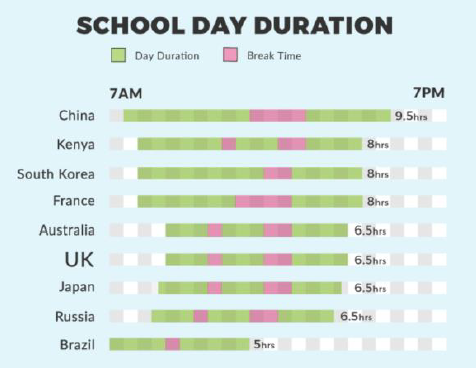 Further questions for discussion
• Lots of schools now take part in the ‘Daily Mile’ initiative which involves completing a mile at some point during the school day. Do you think this would be a good use of breaktime, or do you think free-time or having a choice is fairer?
• Some schools use missing breaktimes as a consequence for negative behaviour, do you think this is an effective strategy?